About The Phentermine Weight Loss Pill 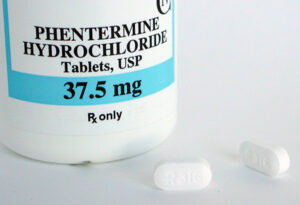 Here are the great questions we hear from my patients over and over:

The combination of phentermine and topiramate may help reduce binge eating in people with binge eating disorder (BED) and bulimia nervosa.

BED is characterized by eating large amounts of food, often quickly and to the point of discomfort. It’s also associated with a feeling of losing control during the binge, as well as feelings of shame or guilt afterward. Bulimia nervosa involves the same binge-eating behavior as with BED, but includes behaviors, such as self-induced vomiting, in an attempt to compensate for the effects of binge eating

In a small 12-week study in obese or overweight people with BED, the phentermine and topiramate drug combination was associated with significant reductions in weight, BMI, and binge-eating episode frequency. In another 12-week study, people with BED or bulimia nervosa were randomized to receive the drug combination or a placebo. Over 28 days, treatment with the phentermine and topiramate combination decreased the participants’ number of binge-eating days from 16.2 to 4.2. The same results were not observed in the placebo group.

By reducing binging episodes, the drug combination may help the estimated 40–80% of people with BED or bulimia nervosa who are overweight/obese lose weight while improving mood and a sense of control with eating.

Andrea Price
01:54 04 Sep 21
I made a last minute appointment to start my services and Shannon did everything she could to accommodate me. Giving me... 1st class service and excellent follow up. I’m looking forward to my weight loss journey with LKN.read more

Rachel Skirvin
20:22 16 Jul 21
Shannon and her Staff are the most caring people I have ever met. I feel like I’m going to visit my friends vs a Dr.... She truly is a blessing. I can go to her with any concern and she advises me and is never judge mental of my situation or circumstance. I won’t go to anyone but her for my weight loss journey. Thank you guys for being everything I need in my darkest hour.read more

Kylie Muellemann
01:58 26 May 21
Shannon is terrific. She is very thorough and listens to your concerns. Highly recommended!

BRENDA Lesley
03:45 12 Oct 20
The ladies at LKN Weight Loss are amazing! From my first visit Shannon was open and informative and always willing to... be personable and never judgmental. Whatever questions and concerns I have they are there and willing to make answer or seek the answers which is amazing. My weight management can be difficult with other health restrictions but Shannon has been very encouraging and provides plans that’s tailored to each individuals needs. I’m so happy with the progress that’s being made currently down over 15 pounds and have loss inches in all areas in less the 3 months.read more

chiquita walker
14:29 11 Oct 20
Shannon and her team have been amazing to work with. I never feel like they are trying to “sell” me because their... programs speak for themselves. While losing my baby weight (40 lbs.) is a huge accomplishment, my biggest achievement was changing my eating lifestyle. I feel like I eat to live instead of the other way around and for that, I can’t thank the LKN team enough!read more

Jesikah McNeil
12:25 11 Oct 20
Dr. Shannon is so personable and knowledgeable. Everyone in the office is to be exact. The level of service and care I... receive there is impeccable. I’ve never had a bad experience. Oh, and did I mention I’ve lost so much weight under her care. Results Results Results!!!read more

Velita Degraft
06:18 11 Oct 20
LKN Weight Loss & Wellness offers the total package: great results and great service with a smile and at an affordable... price! What I really enjoy is the way they make me feel from the time I walk in until the time I leave.A weight loss journey can be a struggle both physically and mentally, but the LKN Weight Loss & Wellness staff are my personal cheering section who reassures me that they are with me all the way! I look forward to every appointment!read more

Kaleigh Stovall
16:46 10 Aug 20
I’ve been a patient at Shannon’s practice for a little over a month now and not only am I super happy with my weight... loss results, I’m also very thankful for the care she and Briana take of their patients! They’re both friendly, personable, knowledgeable, and they make you feel completely comfortable from the very first meeting. You can tell they love what they do and they enjoy cheering on their patients as they gain back their health and confidence. I would recommend this practice and this program to anyone looking for a holistic view at weight loss and accountability from a medical professional who truly wants to see you succeed.read more
Next Reviews

Tell Us How We Can Help You!

Send us an email and a member of our weight loss medical team will get in contact with you ASAP!